Carrot cake is something I never ordered off a menu. A vegetable based cake didn’t sound appetizing. Of course as usual, all that changed in the matter of a day. A friend insisted I try the carrot cake at Moshe’s in Bombay. I declined. By the end of our meeting she convinced me to try a bite, and that was it. We stayed an extra half hour so that I could have a slice to myself. It was so good that I will blindly trust her taste buds forever on. They serve it warm, sometimes with a scoop of vanilla ice cream. What sold me was the fact that there were no raisins (they always get in the way) and the entire cake was covered in marzipan. The cake isn’t too dark, the spices don’t overwhelm your palate and the marzipan really enhances the delicate carrot flavor. I think I’ve hyped up the Moshe’s cake so much that mine may not have any impact on you.

I would never have attempted any version of carrot cake if it wasn’t for a friend requesting I try my hand at it. I wasn’t happy with most of the recipes I found because of the raisins, eggs and nuts. It isn’t as simple as eliminating an ingredient. Recipes are usually tailored so that the ingredients highlight each other and everything comes together harmoniously in a bite. I ended up adapting a recipe that had already been adapted from Martha Stewart’s original. I wanted to keep it real simple and stay true to the carrot. I used cinnamon, nutmeg and ginger but I made sure I didn’t over spice. 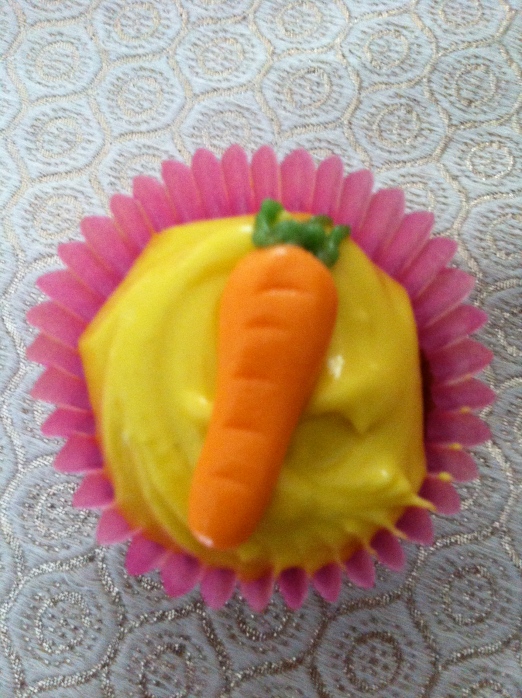 For the frosting, carrot cake pairs best with cream cheese. That’s apparently a thing. I’ve seen it done with a sugar glaze before as well but I stuck with cream cheese. Not just cream cheese though; that I reserve for red velvets. I frosted half the batch, the pink ones, with maple cream cheese frosting for those who like their cakes sweeter. The other half I frosted with a lemon cream cheese frosting. The friend I was baking for had tried it in Dubai and suggested I try the same. DELICIOUS. It’s the slightest bit tart which nicely cuts the sweetness of the cake. My favorite element though, the factor that made everything work for me was marzipan carrots. Cream cheese frosting doesn’t hold very well so it’s difficult to pipe. I didn’t want the cupcakes to look messy so I busted out some marzipan. I colored and rolled them into little carrots and placed them on top of all the cupcakes. Once again the almond and carrot were magical together. Although I will stay loyal to Moshe’s I have to say the flavored cream cheese was a welcome addition. I’m sure you can tell from the picture I was going for pops of color as opposed to realism. It makes for cupcakes that are yummy but also fun!