My sophomore year of college I had a roommate who was a compulsive baker. We always had something in the refrigerator of our tiny kitchen which we shared between seven people. This is when I was introduced to American staples such as red velvet cupcakes and homemade lemon curd. She was always very adept around the oven and kept us well fed. Armed with a few extra kilos and a basic education in baked treats, I began to venture outside the dorm room.  All at once I discovered Manhattan’s numerous bakeries such as The Buttercup Bakeshop, CRUMBS, Magnolia and my favorite, Two Little Red Hens. I still couldn’t distinguish between dry and creamy frosting or understand the importance of moisture and lightness in a cake. All that happened when I moved to Paris and took cooking lessons with a Countess and befriended a self proclaimed food critic. It was a whole new world filled with chestnut butter and olive oil macarons. Those experiences collectively inspired me seven months ago, while I was eight a half months pregnant and desperately looking for something to distract me. Up until then I was always better at eating than baking. When I first gave it a try the cakes came out tasting pretty good but they looked terrible. I’m posting some pictures of my first few attempts so that you can see the evolution from piling frosting to piping frosting. 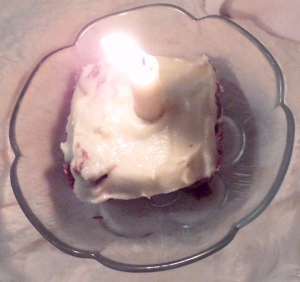