There’s something about dark chocolate that keeps you addicted. It’s more about the rich flavor than the supposed health benefits. Those are just a bonus. Personally I was never a big fan, always favoring sweet milky chocolate over its bitter cousin. Recently however I’ve encountered dark chocolate connoisseurs who have pushed me to experiment with this amazing ingredient. It started off as an attempt to replicate the Two Little Red Hen’s Brooklyn Blackout cupcake and then turned into something darker and equally delicious. This cupcake went through several versions before it reached its final form. I’m going to do a brief walk through of its evolution.The ORIGINAL: They describe it as a chocolate cake with chocolate pudding and a fudge frosting. I describe it as heaven. It’s moist, full of flavor and oh so creamy. I haven’t quite figured out how to post licensed pictures on my blog so here’s a link Brooklyn Blackout at Two Little Red Hens.

Note: The Blackout was first served during WWII at Ebinger’s bakery in Brooklyn. Inspired by the Blackout drills carried out around the city.

The FIRST ATTEMPT: I started out using a cake recipe that was just really messy. Yummy, but I found that I was praying that it wouldn’t collapse. There’s a picture in my second post.

The SECOND ATTEMPT: This was my first try at blackout cupcakes. The cake was too dense and it tasted more like fudge than a cupcake. Also they didn’t look neat at all. That’s why there aren’t any pictures!

The THIRD ATTEMPT: I managed to keep the cake moist, light and fluffy and the filling melted in my mouth. I added a chocolate ganache swirl and some sprinkles to make them more presentable. This however was not appreciated by the dark chocolate lovers. They wanted even more chocolate and didn’t seem phased at all by the creamy ganache. 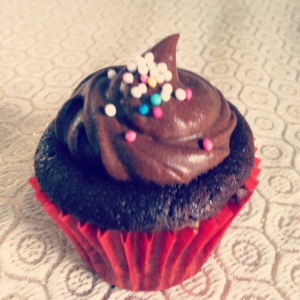 The FOURTH ATTEMPT: So to satisfy these dark chocolate addicts I threw on an extra layer of the filling under the frosting and shaved dark chocolate, but it still wasn’t enough! I still haven’t completely given up on the piped ganache frosting but I think I’ll develop it in a different direction.

The FINAL ATTEMPT: I think I have it down pat now. Just had to get rid of the ganache and top it off with a few cake crumbs. Back to basics. This seems to have done the trick and I think this will now be my very own Dark Chocolate Blackout Cupcake. This is for the loyalists. Really really dark and really really delicious. I’ve also tried some other versions to make it more appealing for the rest of us. More on that later.